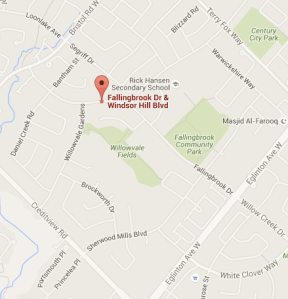 An abduction attempt in the River Grove area – in which a 22-year-old woman was dragged to a car while walking early Saturday – has police warning residents to watch their backs.
The incident took place at 1:45 a.m. on Nov. 7 while the woman was on foot in the Fallingbrook Dr. and Windsor Hill Blvd. area, near Creditview Rd. and Eglinton Ave. W.
A man grabbed the woman, pulling and dragging her toward a parked vehicle at the intersection
She screamed and the man released her, Peel police said, running to his vehicle and driving eastbound on Windsor Hill.
The incident was reported to police the next day.
Investigators have found surveillance footage of the incident, which will be released to the public.
The suspect description is 22 to 29 years old, possibly Middle Eastern descent with an olive complexion, 5-foot-10 with an average build, square shaped face and dark hair.
He was wearing a dark grey hoodie and lighter grey track pants.
The vehicle is described as white, unknown make or model, but appeared to be in good condition.
Anyone with information is asked to call investigators at 905-453-2121 ext. 1133 or Crime Stoppers at 1-800-222-8477.
@qewsouthpost