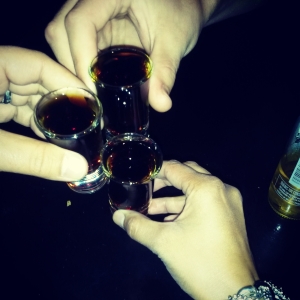 Wednesdays and Sundays were slow nights until the Toronto Blue Jays stunned Major League Baseball – and fans – by going into straight beast mode.

“I’ve never seen us be so busy for Jays games before,” said the Clarkson Pump and Patio manager Victoria Fournier, noting it’s traditionally a Leafs crowd.

End of summer and cooler temperatures usually lead to a lull, but now there’s even a wait list, she added.

“If you hang around the bar, you will hear every player’s name screamed,” said Fournier.

Blue was seen everywhere Wednesday night as the Jays battled the Baltimore Orioles in a doubleheader stateside.

They secured the top spot in the AL East by winning the first game 15-2.

Throughout the wild card race, faithful fans have also been flocking to Wingporium in Port Credit.

“The Jays have brought a lot of business to our establishment,” said owner Christian Mazaris.

“It brings excitement. People in this city are dying to have something to follow, and something to look forward to. We’ve been in a drought for so many years.”

Neither establishment wanted to get into specific numbers regarding sales, but last year’s Leafs team, Mazaris said, was a bust to the point where people weren’t coming out to watch hockey.

The Blue Jays, though, have “sparked a lot of fan commitment,” he said.

General manager Matt Appelt said the Jays “encompass everything about Canada,” calling the impact on their bottom line unbelievable.

“Bars just become a great place when the Jays are playing, especially since they’re winning.”

He’s excited about the post-season as a fan, and a bar manager.

The Jays have scored home field in the AL division series, “which is even better,” Mazaris said.

“That team spirit … it leads to more people jumping on the bandwagon, which is gold for us.”