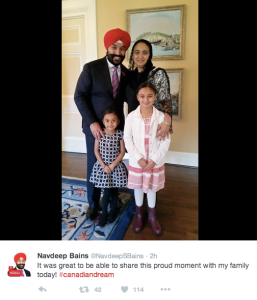 Because it’s 2015.
Veteran Liberal MP Navdeep Bains was officially named Canada’s Minister of Innovation, Science and Economic Development as Prime Minister Justin Trudeau was sworn in at Ottawa’s Rideau Hall Wednesday with his 30-member cabinet.
Bains, 38, the Mississauga-Malton Member of Parliament, also received the Great Seal of Canada from Governor General David Johnston, tweeting he is “honoured to serve as the Registrar General of Canada.”
Bains takes over the role formerly known as Minister of Industry; he’s been to the capital before.
Bains was first elected as MP in Mississauga-Brampton South during the June 2004 election, serving three terms before losing his seat in May 2011 to Conservative Eve Adams.
He cruised to victory last month in Mississauga-Malton with 59.1 per cent of the vote, and is the only Mississauga MP in Trudeau’s cabinet.
Bains has a finance background and MBA, working as an accountant with Ford and a visiting professor at Ryerson University.
He has experience handling public policy issues such as international trade, government operations, small business and human rights.
Liberal insider and vice-president of public affairs at Enterprise Canada Lindsay Maskell said Bains has clearly become a trusted partner of Trudeau following his stint as co-chair of the Ontario campaign during the federal election.
It’s safe to say when it comes to priorities and planning, coupled with growing the economy, “he’s going to be front and centre,” said Maskell.
Details will be publicly unveiled in mandate letters for new ministers.
With ‘science’ figuring prominently in Bains’ new title – plus Etobicoke North MP Kirsty Duncan being named Minister of Science – it means “he’s expected to work collaboratively,” said Maskell.
An estimated 3,500 spectators showed up at the grounds to watch Trudeau, wife Sophie Gregoire Trudeau, and the new cabinet members make their entrance.
Trudeau delivered on his campaign promise of gender parity, selecting 15 women and noting it’s “a cabinet that looks like Canada.”
When asked why it was so important, he replied, “because it’s 2015.”
Mayor Bonnie Crombie congratulated the “unprecedented appointment of female representatives, who will now sit around the cabinet table, and shape the future of our nation.”
Parliament will sit Dec. 3, with a speech from the throne delivered Dec. 4.
@qewsouthpost