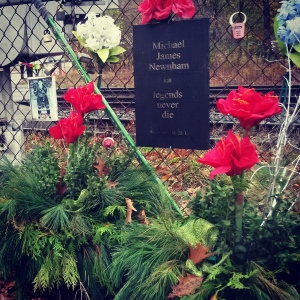 (Photos: Kelly Roche/QEW South Post)
Updated
BY KELLY ROCHE
Anytime is train time.
Lorne Park residents were reminded of that Friday as a joint safety blitz, Operation Lifesaver, took place at the rail crossing between Albertson Cres. and Birchview Dr.
“We’ve seen a lot of bad behaviour,” said GO Transit’s director of safety and security Bill Grodzinski.
With one rail-related death each month across the Greater Toronto Hamilton Area, multiple agencies were on site to educate pedestrians, cyclists, and drivers about preventable collisions, deaths, and injuries at railway crossings.
Tow truck driver Randy Muzzi, 54, was killed Oct. 30 by a GO train after he tried to move his vehicle near the Lisgar station on the Milton line.
Trains along the Lakeshore West line travel between 75 to 80 miles per hour — converting to at least 120 kms, Grodzinski said.
Lorne Park was chosen due to high volume and another tragedy.
Michael Newnham, a 17-year-old Lorne Park Secondary School student, died at the crossing Nov. 23, 2013 when he was struck by a GO train after tripping and falling. Plenty of teens still use the tracks as a shortcut.
With GO eventually shifting from a commuter railway to an urban transportation system, a train will be running through every seven-and-a-half minutes.
“As busy as this is now, it’s going to get busier,” said Grodzinski.
Trains need 800 metres or more to stop, he said, adding “they don’t swerve, they don’t stop quickly.”
He pointed out the “one plus one” rule, where there is potentially always another train on deck.
“We saw that here this morning,” when a man on foot waited until the first train passed, then crossed “and there was another train coming,”  Grodzinski said.
Resident Waylon Iserhoff said he takes the GO train semi-regularly.
“I’ve been impacted by it when there has been a casualty,” said Iserhoff.
“So certainly, I think it’s a great initiative to promote safety.”
Sometimes education isn’t effective.
Peel Paramedics spokesman Brad Bowie said they deal with plenty of people who want to harm themselves.
“They may use this as a venue to do it,” said Bowie.
Then there are collisions.
Peel Regional Police Const. Joel Genoe said when it comes down to a train versus a motor vehicle, “the car is going to lose.”
RECENT RAIL-RELATED NUMBERS
Jan. 1 to Aug. 31, 2015
Canada       Ontario
Incidents                148                  38
Deaths                       30                     4
Serious injuries      26                     8
(Source: Transportation Safety Board)
@qewsouthpost