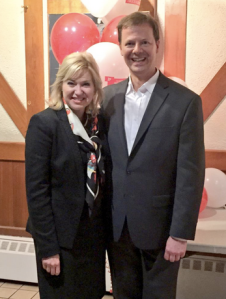 Following Monday night’s results, “our city has a seat at the table,” Crombie said, and members of city council “look forward to working with our new MPs, and the new Trudeau government, to advance the priorities of Mississaugans.”

That includes the south end.

Mississauga-Lakeshore has “a history of strong representatives, including the outgoing MP, Stella Ambler,” said Crombie, adding she’s confident MP-elect Sven Spengemann “will continue this tradition and deliver results for the riding.”

Ambler, a Tory, served one term in Parliament. During her tenure, the outgoing Conservative government committed to distributing $150 million nationwide for infrastructure via the Canada150 Fund from its 2015 economic action plan.

The Small Arms Building in Lakeview received $1 million from Ottawa, “and it is my hope that the projects that have been committed to by the federal government receive the funding,” Crombie said.

A designated heritage building since 2009, it sits on the Arsenal Lands, a 15.7 hectare parcel owned by the Toronto and Region Conservation Authority. The Small Arms is being redeveloped into office and studio space for local entrepreneurs, academia, small businesses, and artists — ultimately a hub for culture, heritage and science. It will host farmers’ markets, performances, conferences, and other community events.

Across town, the Riverwood Conservancy also received $745,630 from the Canada150 Fund to enhance and preserve Riverwood Park and Chappell House.

Funding supports the renovation, expansion and rehabilitation of existing infrastructure which provides community and cultural benefits for the public. Selected projects are expected to be completed by the end of the 2017 construction season in time for Canada’s 150th anniversary of Confederation.

Throughout the federal election campaign, Crombie joined big city mayors and the Federation of Canadian Municipalities in pushing for dedicated, predictable funding for public transit and infrastructure.

Trudeau’s Liberals have made a $60-billion election campaign pledge to help cities with infrastructure over the next 10 years, with $20 billion for public transit.

Also on council’s agenda: the Missing Link – a plan facilitating all day, two-way, GO Train service on the Milton line. It will open up the continental gateway allowing for the better movement of goods and people, Crombie said.

Crombie, who served as a Liberal Member of Parliament for Mississauga-Streetsville from 2008 until 2011, said her office “will waste no time” requesting meetings from the newly elected MPs and federal government.

The city, province, and country are now in the hands of the Liberals.