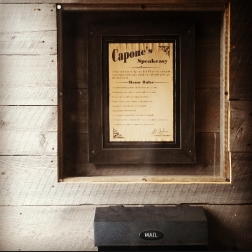 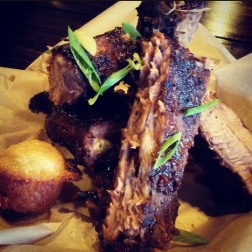 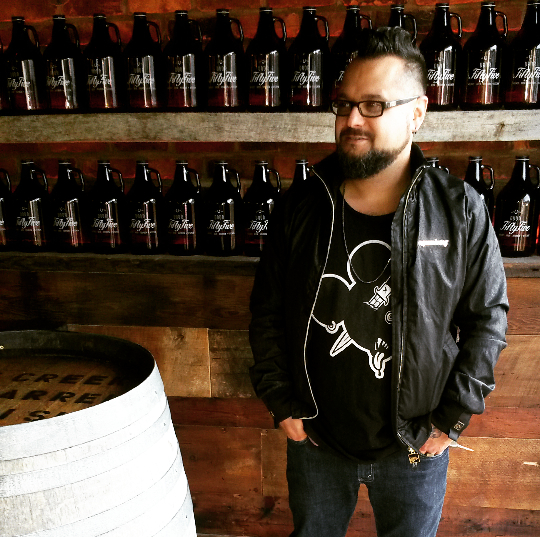 (Photos: Kelly Roche/QEW South Post)
BY KELLY ROCHE
A nod to American mob boss Al Capone hangs over the mailbox outside of DoorFiftyFive; it’s 1919 in 2015.
“People kind of have a connection to that era,” said Tiago Pablo.
Read it while sober then head inside and prepare for sensory overload, libation options aside.
Paying homage to Prohibition-era rum runners, you’ll bypass about 36  hot sauce options en route to the whiskey tunnel to pick your proverbial poison.
“We’ve been surprised by how much of the high-end stuff has really moved,” Pablo said.
The 37-year-old general manager, executive chef, and admitted “control freak” lives and works in Port Credit.
He’s the face behind a new speakeasy-inspired whiskey bar, with a country twist, at 55 Lakeshore Rd. E.
“We focused on bringing a downtown (Toronto) bar to Mississauga,” said Pablo.
Owners Steven Daicos, from the Olive Press in Oakville, and James Tsougios, a contractor, partnered with Pablo and crafted the unique watering hole, which opened roughly three weeks ago.
Tsougios built it using materials such as tobacco sticks and 100-year-old barnwood, said Pablo.
It’s an utter mish-mash: whiskey-bourbon-bar; ’90s hip-hop hangout (after 11 p.m.); design muse; self-serve-beer booths; southern-American-Spanish-Portugese-BBQ.
A cast iron skillet in the kitchen was passed down from Pablo’s grandmother. The General Lee street corn is named after a family recipe Pablo received from a Savannah (Georgia) woman. Beams are from 1830.
Everything at DoorFiftyFive has a story, including the address.
The former home of the Harp Restaurant & Pub, which closed in 2014 after 26 years, comes with emotional baggage.
“The Harp meant a lot to people,” said Pablo, calling it the El Mocambo of Mississauga.
“Those are big shoes to fill.”
He relays accounts of people who went there to raise a glass for everything from marriage to divorce.
Nonetheless, residents are embracing the new bar, Pablo said.
And they’re spreading word.
John Lam, Alysha Madhani, and Ashleah Genovy came in after hearing about it from friends.
“It was great,” said Madhani. Her colleagues agreed, praising the menu and service.
“We need a place like this” in Mississauga, said Lam.
“Kind of edgier and more hip … very chill; cool vibe.”
Cool vibes are something Pablo knows how to cultivate — he was a DJ in a past life.
“My mid-nineties hip-hop collection is rivalled by very few,” said Pablo.
It’s reflected on the menu: The ‘W’ in chicken & waffles is punctuated by a Wu-Tang Clan symbol. Now that’s gangster.