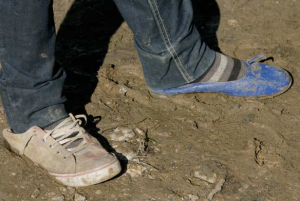 Great crises produce opportunities for even greater hope. Such hope was on display last Sunday afternoon at the Islamic Society of North America (ISNA) mosque in south Mississauga as Muslims, Christians, and Jews joined to support each other’s efforts in responding to the Syrian refugee crisis.

Representatives from ISNA and Oakville’s Maple Grove United Church and Shaarei Beth-El Synagogue drafted a proposal several months ago to co-sponsor a seven member family of Syrian refugees. The application has now been submitted to Canadian immigration authorities, and Sunday’s event was designed to raise part of the $35,000 fund required for sponsorship to Oakville.

Several members of this new entity called Abraham’s Children Together (ACT) spoke of the need for concrete action in response to Syria’s suffering, and we heard, via Skype, live witness from a doctor who continues to work in Syrian hospitals that have been bombed.

This gathering, in its atmosphere of relaxed cooperation, was a direct challenge to the tensions and rivalries that have been stirred up in recent weeks in our country. The easy camaraderie among the presenters and participants revealed they were comfortable working in support of one another.

South Mississauga may not be the centre of the universe in many people’s eyes, but something significant is happening here in the realm of faith that could be opening a new chapter in interfaith relations.

Many developing countries are struggling with the inevitable political failure of neo-colonialism. The nation states imposed by departing European powers upon their former colonies are disintegrating. They were never coherent cultural, political, ethnic, or religious entities, and their power structures were not supportive of the functioning of the human communities that they encompassed. Ongoing civil wars in Africa and the uprising known as the Arab Spring have exposed this failure before the world, and has generated a crisis of human displacement not seen since the upheaval of World War Two.

People in these former countries have turned away from the secular political arrangements imposed upon them to embrace the collective identity and security offered by religion. In Africa, independent and denominational Christian churches continue their pattern of exponential growth. Africans who belong to such churches know that no matter where they go, someone will be there to offer emotional, social, cultural, moral, and even financial support. In countries north of the Sahara, Muslims are looking to their faith for the same kind of support. In both cases, faith is a necessary means of survival in a world where political entities have abandoned their social responsibilities.

Religion, however, has both a good side and a dark side. At their best, all religions offer millennia of accumulated wisdom into the human condition through which we can orient our lives into a coherent community. At its worst, religion often suffers from a garrison mentality. All other religions and expressions of faith, or lack of faith, are seen as a threat to their particular doctrine and viewpoint. Believers can get locked into endless sectarian conflicts attempting to purify their community of foreign and corrupting influences.

Sectarian religion narrows the possibilities for collective security down to a small group of like-minded believers. Only true believers are entitled to the benefits of security offered by religious identity. Mutual suspicion often results in extreme views and violent actions that inevitably attract popular attention. Decent people attempting to build life in community are dismissed as boring and unremarkable, remaining out of sight and out of mind.

Faith leaders and faithful people here in south Mississauga and Oakville, are, however, attempting to redefine the possibilities for collective social security away from the garrison mentality that threatens each religion. By supporting each other as people of faith in offering a collective response to this crisis, they are modelling a possibility for collective security that can be shared among all people of faith. Mutual support in taking care of each other’s needs is how sustainable community gets rebuilt beyond the confines of a narrow sectarian identity. We have a long way to go, but it all may have started right here among us. That is reason enough to hope.

Daniel Phannenhour (Pastor Dan) is an unretired Lutheran pastor and father to three lovely young women. He currently lives with his wife in the Oakville parsonage, and is exploring new ways of embodying the Christian faith while celebrating the multicultural and multifaith diversity of our community and nation.