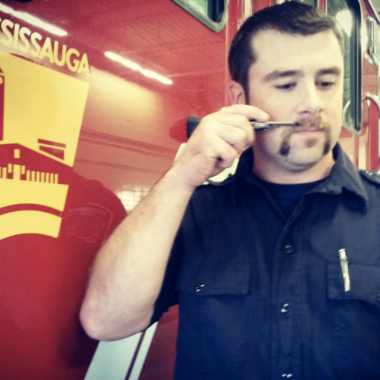 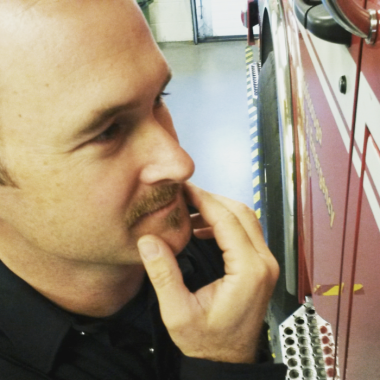 Paul Maynard tried the Tom Selleck last year, and is now inspired to emulate Colonel Sanders.
“Every year, something different,” said Maynard.
He’s been a Mississauga firefighter for 12 years and works out of fire station 103 in Clarkson, near Southdown Rd. and Royal Windsor Dr. By growing mo’s with his bros at the fire halls, more than $16,500 has been raised for Movember over the past two years.
The Movember Foundation is a global charity raising funds and awareness for men’s health in which participants start November 1 clean-shaven and grow a moustache or ‘mo’ for 30 days.
It isn’t exactly pretty.
“Most of the time, we just poke fun at each other, ’cause most of them look terrible,” said firefighter Rob Cavanagh, who is also taking part.
“The first week’s pretty rough and then by the end of the month it looks pretty good.” Guidelines are in place, though, to ensure there is no interference with their helmets, and fire crews may hold contests to see who will keep the ‘stache the longest.
“Some guys wuss out,” said Maynard.
Last year, anyone who dropped out had to buy dinner for the team and pay an extra $20 to the Movember fund.
“It’s for a good cause, so it’s fun,” said Cavanagh.
Money raised supports men’s health programs in four areas: prostate cancer, testicular cancer, mental health and physical inactivity.
Firefighter cancers “are disproportionately higher than the general public, many times higher,” said Mississauga Fire Fighters Association IAFF Local 1212 president Mark Train.
“Many of our friends contract various cancers. Prostate cancer prevalence among firefighters is also very high, and in fact, a recognized occupational disease.”
The province announced extended health coverage in April 2014, adding six cancers to the list qualifying for workplace benefits.
Breast cancer, multiple myeloma and testicular cancer were immediately added.
Prostate cancer, lung cancer and skin cancer will be phased in by 2017, and the addition of all six will be retroactive to Jan. 1, 1960.
The annual campaign is a light-hearted means of education.
“I think it’s important for all firefighters to be able to have a better awareness of their own health issues,” said platoon chief Alan Hills.
“It provides us with the knowledge that there’s support,” within the fire department, at home, and “in the city family as well, and we can’t stress enough the importance of regular screening for colorectal diseases,” said Hills.
In addition, Movember bolsters mental health initiatives, “something that is near to all of us, given the number of first responder suicides and burn-out from responding to traumatic events,” said Train. At least 30 first responders have died by suicide this year, according to the Tema Conter Memorial Trust.
Click here to donate to the Mississauga Fire team.
@qewsouthpost