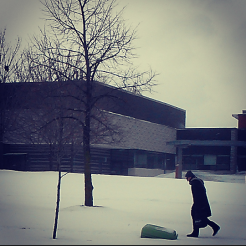 The drive home was much smoother after a rude winter awakening greeted Mississauga residents Tuesday with snow, ice, and strong winds — but there’s still risk of snow squalls into Wednesday.

“It’s snowy, it’s slushy … you can’t see the lanes,” said OPP Sgt. Kerry Schmidt at 7:45 a.m..
For those heading east, “Toronto is probably a lot worse off than Mississauga right now,” Schmidt said, adding he drove through Mississauga “and it’s mostly just wet there.”
At least five cm of snow was expected in Halton-Peel and Toronto, according to Environment Canada.
“The snow may be heavy at times,” reads the statement.
Tuesday’s predicted high was -3 C, falling to -6 C in the afternoon.
Motorists were advised to be careful as roads may become hazardous due to blowing snow and poor visibility. Peel Police were reporting five minor collisions before 8 a.m.
There weren’t too many highway crashes – yet. “They’re coming in on a frequent basis but it’s still pretty ugly out there,” said Schmidt.

Due to slow traffic caused by the weather, your #GObus is delayed up to 40 minutes for your morning commute. Update will follow as needed.

GO Transit was asking passengers to allow extra time and be careful in parking lots and platforms, while flights to Montreal, Ottawa, Baltimore, New York, Pittsburgh, and Sarnia, among other destinations, were cancelled at Pearson International Airport.

Snow this morning may cause some delays. If you're flying, confirm flight time with your airline or at https://t.co/siQEK1eP2c.

If you’re behind the wheel and can’t see the lane markings, “drive as carefully as you can and just be courteous to those around you, ’cause they can’t see their lanes either,” Schmidt said.
He advised drivers to “take it easy. Understand that we’re all trying to get where we’re going, and we all need to work together.” Flurries are predicted Wednesday, according to the weather agency, with 2 to 4 cm falling and a high of -8 C.
-Kelly Roche
@qewsouthpost