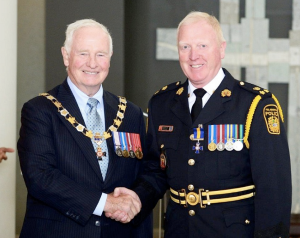 A senior Peel police officer has been recognized for his significant contribution to policing in Canada.

Deputy Chief Chris McCord was awarded the Order of Merit of the Police Forces by Governor-General David Johnston during an Oct. 5 ceremony at the Citadelle of Québec.

“Deputy Chief McCord has always worked hand in hand with the men and women of this organization, along with members of our community, to help us achieve our vision of ‘a safer community together,’” Police Chief Jennifer Evans said in a statement Thursday.

McCord began his policing career in 1979 as a member of the Royal Ulster Constabulary in Northern Ireland. He joined Peel in 1988 and was named Deputy Chief in November 2012.

McCord was made a member of the order, one of 31 officers and civilians commended for exceptional merit, leadership, and community development. The Order was established in October 2000.