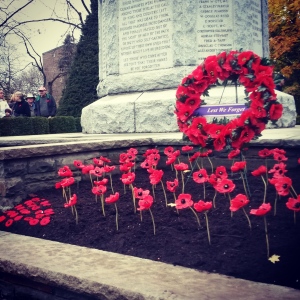 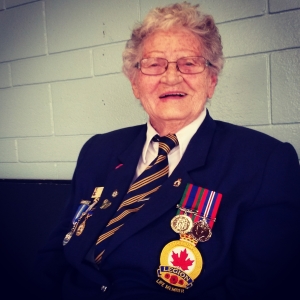 BY KELLY ROCHE
Fallen soldiers and veterans were honoured by hundreds who gathered at the Stavebank Cenotaph Wednesday morning to remember them.
Sybil McClure hasn’t forgotten what she has seen since joining the Canadian Women’s Army Corps in 1941. She was only 21 and now, at 96, there are still secrets she must keep.
“I couldn’t tell anybody where I was. My mom and dad didn’t know,” said the longtime Port Credit resident who currently lives in Milton.
McClure was sent to the Ajax area for Camp X — a covert operation where young men and women from around the world underwent training for six weeks.
“They would take a course in demolition, and how to kill,” said McClure, who was a driver during the Second World War.
“When they were finished, they used to be sent back to Europe to be spies and underground people.” Camp X was a fundamental link between Britain and the U.S. for intelligence.

Messages from the British High Command would come into Camp X and be decoded, deciphered, recoded and then disseminated; Americans entered the war after the Japanese bombed Pearl Harbor on December 7, 1941.
“Sybil’s contribution is phenomenal in that she is so humble and has done so much,” said parade marshal Phil Booker.
“Camp X saved so many lives because those covert operations were able to probably pre-empt a lot of issues that would’ve come up that would’ve cost more Canadian lives, and she was part of that.”
Lives were lost long before Camp X. More than 650,000 men and women from Canada and Newfoundland served during the First World War, with at least 66,000 killed and more than 172,000 wounded.
The armistice of November 11, 1918, brought relief to the entire world.
Heritage Mississauga estimated 95 known fallen soldiers from the First World War were local.
Reflecting on the day’s events, “it feels lonely because there’s not many of us left,” said McClure.
“I guess I’m glad I’m here,” she said before laughing.
McClure has been a member of the Col. Alex Thomson Branch #82 of the Royal Canadian Legion and the Ladies Auxiliary for decades.
“She still comes out each and every Remembrance Day,” said Booker.
The parade, church service, and wreath-laying ceremony were followed by a reception at the Port Credit Legion.
Remembrance Day ceremonies also took place in Streetsville, downtown Mississauga, and Ottawa, where Minister of Veterans Affairs Kent Hehr was Wednesday.
“It is immensely humbling to consider that, since Confederation, more than 2.3 million Canadians have selflessly served our country so that we may know a better world,” said Hehr.
@qewsouthpost