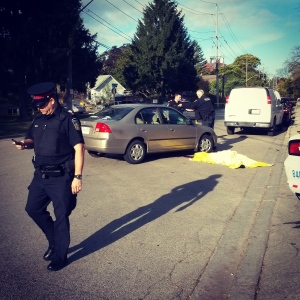 A call came in at 6:54 a.m. for a pedestrian struck at Seneca Ave. and Lakeshore Rd. E.

Pinned under a four-door beige Honda Civic, paramedics freed the woman but “despite their best efforts, the woman was pronounced (dead) on scene,” said Peel Regional Police Const. George Tudos.

A yellow tarp covered the body, near the front right wheel, when the coroner arrived.

Two black shoes, or flats  – one upside down – and a pair of broken tortoiseshell sunglasses were on the road next to blue evidence markers.

“It’s sad,” said Franco Aiello, who works at a car wash across the street.

“I got here, just a regular day,” he said, until he saw nearly a dozen police vehicles.

Initial reports said a truck had hit the woman but it turns out the truck driver stopped to help.

It’s too early to say if the Civic driver – who is co-operating with police – will be charged.

Police closed off the intersection, where the major collision bureau was reconstructing the scene to “try and determine how exactly this happened and why it happened,” Tudos said.

Tracy Hardwick lives nearby and said the area along Lakeshore  is “horrible” if you’re crossing the street with a stroller.

“It’s not a great area for people to walk,” he said.

“A lot of traffic here, a lot of cars parked on the road. It’s hard to see when you turn.”

“It’s bad,” Brown, who uses a walker, said of trying to navigate on foot.

“The area is growing so much with all the new housing and all the new apartment buildings going up. There should be more lights and more pedestrian crossways.”

Ward 1. Coun. Jim Tovey said he lives around the corner from the collision and in five years, his office has never received a complaint via e-mail or phone regarding Seneca Ave.

“This is a tragedy, and all we can do, really, is send our thoughts and our prayers to the family at this time,” said Tovey.

He acknowledges Lakeshore – formerly Hwy. 2 –  can be challenging.

“A lot of people still treat it like a highway, which is just awful,” Tovey said.